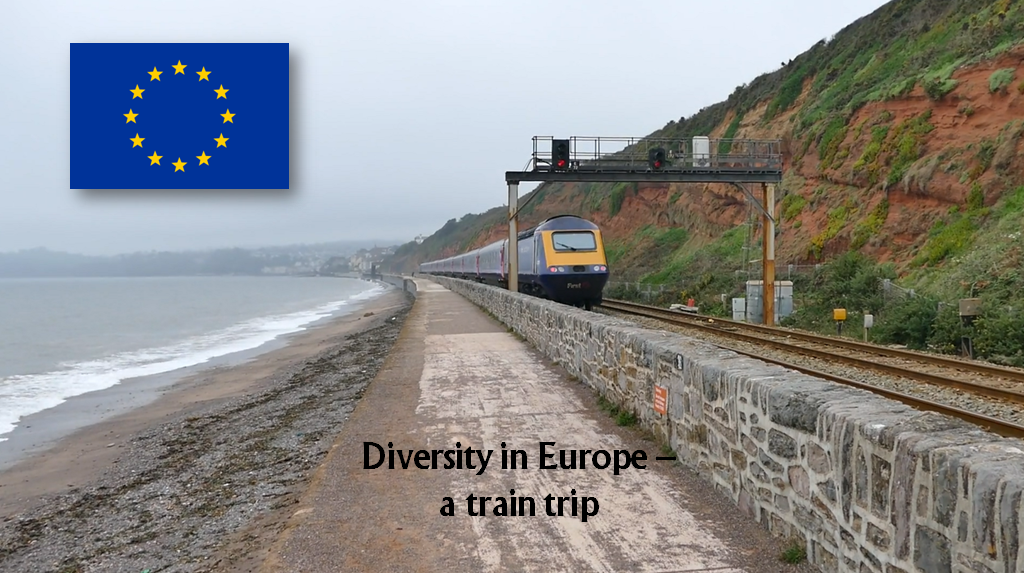 Trains are fascinating me. If you get on a train, after a few hours you leave the train into a new city or country – on time – if you didn`t get on a German train.
I enjoy being on trains and crossing borders. I sink into the atmosphere on stations and experience the other cultures mixed with my own culture. While being on a train, which is crossing borders, I have good and encouraging meetings. If an international airport is part of my journey, I hardly can hold back my interest in other cultures. For me it always is like a trip to another European country e.g. Italy, France, Switzerland or Belgium. Playing with languages, which is basically English and a mixture of French and Spanish is a great pleasure and refreshes my brain. Only listening to talks, is like being on vacation. It is scientifically proven, that speaking different languages promotes being tolerant towards other cultures. The development of tolerance and integration starts in the very first years in childhood. The children, who meet other cultures, experience that living together is fun and discovering the differences and things they have in common.

At a small station in Budapest, Hungary I made the experience that the “old white man” hasn’t the racist attitude always. Generally speaking Budapest has an open-minded attitude towards other cultures. On that station a Hungarian man screamed at me, because in his eyes I did something wrong. As I don’t speak Hungarian, I had no idea, what he was talking about. An old lady rushes to help me out of the situation. She talked to him and after the man left, she explained in gestures as good as she could, what just happened to me. She pointed out that the man has been a complete idiot. She let me understand with such a warm welcome, that only the man and not whole Hungary had a problem with me. She clarified that she loves meeting foreigners in her country. I’m really thankful to the old lady, her courage and kindness. As an adult you need courage and strength to profit from the diversity of other cultures. The diversity in Europe is a present, not a burden. Languages and other cultures enrich our lives. There is nothing more refreshing than talking with travelers on a train trip. But the talk needs courage and strength, too. The politicians have to become more encouraged to protect the diversity in Europe and should stop driving on their own tracks, which has nothing to do with reality.